Jelena Ostapenko and Timea Bacsinszky are the first two semifinalists in Paris.

The Latvian stunned the former world no.1 Caroline Wozniacki 4-6 6-2 6-2 after playing a tennis out of this world. Ostapenko had a terrible start of the match (emotions?) to find herself trailing on a 0-5 scoreline. Then, the world no.47 found her range to win four consecutive games (4-5), but it was too late to lose the opener 6-4. After dropping the first set, Jelena kept on delivering a series of missiles from the baseline that the Dane was just unable to tame.  It’s interesting to notice that this is the 3rd time in 2 months that Jelena has defeated Caroline on clay after Charleston (6-2 6-4) and Prague (5-7 6-3 7-6).

“Of course when I came here, I didn’t expect I’m going to be in the semis, but I was playing better and better every match,” Ostapenko commented in the post-match press conference. “I think if I keep it up, I think anything can happen. Caroline was playing pretty well today.

At the beginning, was really windy and was really tough for me to get my game, because I couldn’t expect where the ball was bouncing. She served pretty well, and then I just got my game back.”

First Latvian woman to advance to a semifinal at #RolandGarros in the Open Era ðŸ’ª #RG17 pic.twitter.com/3uygPQRATp

Timea edged home darling Kiki Mladenovic in straight sets playing her “smart tennis.” The Swiss got it clear that the Frenchwoman was too nervous to entangle her opponent with her crafty shots. After losing the first set, Mladenovic wasted a 3-1 lead in the second to lose four consecutive games (3-5). Eventually, the Swiss won the contest 6-4 6-4.

Bacsinszky before her presser: “Oh my God, such a packed room! Players are ready. Please sit as quickly as you can!” ðŸ˜‚(ðŸŽ¥ Eurosport) pic.twitter.com/NyYOK0rEMn

The head to head

Jelena and Timea have never played each other. 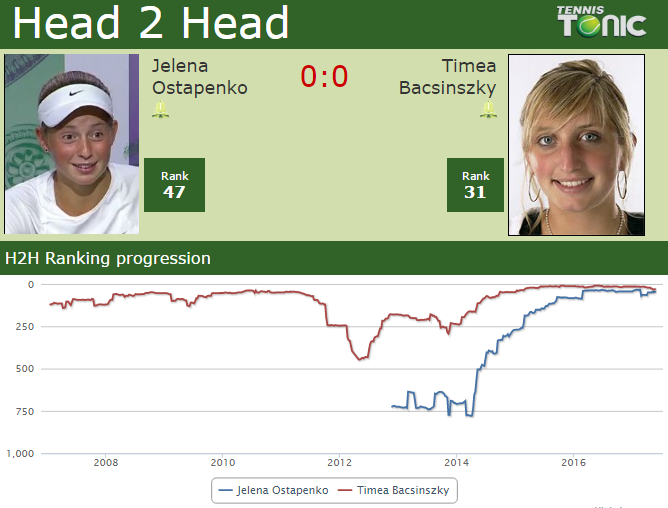