The Bulgarian sensation is finally starting to achieve greatness after winning a sensational title at the ATP Finals in London.

Grigor conquered these finals without losing a single match, but he had to win a couple of tough clashes on the way.

Even if Grigor had a commanding 4-1 h2h lead over Goffin and he demolished the Belgian in the round robin (6-0 6-2), Dimitrov was completely aware that this final would have been a completely different story. In fact, in the opening set David broke Grigor in the very first game; then the Bulgarian broke back immediately (1-1) to lose his serve again soon after (1-2). Grigor managed to level the scoreline with another break in the 8th game (4-4) to break Goffin again in the 12th game and win the opener (7-5).

The second set was more “regular”, and the only difference between the two was just 1 break in the 7th game (3-4) when the Bulgarian dropped his serve at 15. Goffin held his following service games to bring the clash to the decider (6-4).

In the 3rd set, Grigor had no problems to hold his service games with the exception of the first one when he had to save 3 break points. Later, the Bulgarian won the decisive break in the 6th game (4-2) to consolidate his lead after holding his serve (5-2) and then win the match 7-5 4-6 6-3. 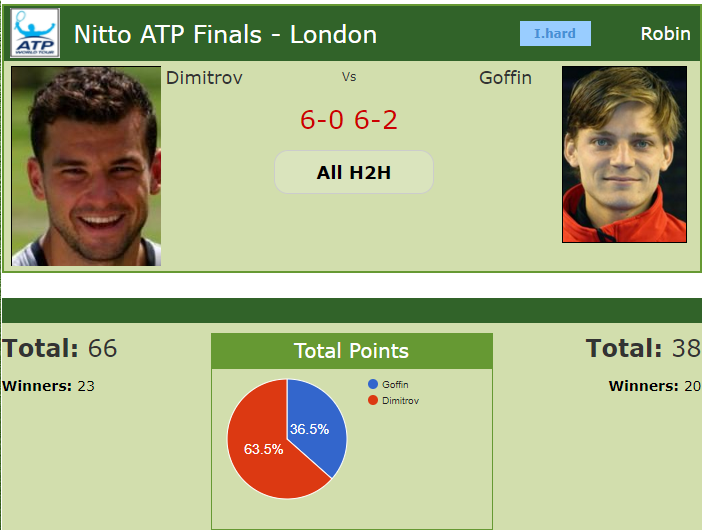 It’s a great platform to build next season. DIMITROV

Grigor was absolutely elated after winning the title to comment

“This makes me even more locked in, more excited about my work, and for what’s to come. It’s a great platform for me to build on for next year. It’s going to be amazing in the off-season. I know what I have to do in order to do good.”

This is Dimitrov’s 8th career title, the 4th of this great season. After this week he will be ranked no.3 in the world… going for more.