Dominic Thiem manages to retain his title in Nice after beating his dear friend Alexander Zverev. The Austrian was the hot favorite to win the final also because Sasha was coming from an extremely intense week after winning all matches in 3 sets and spending 8 hours on court in the previous three days.

The match wasn’t as smooth as predict for Thiem that found himself immediately one break down in the opener. Probably the most important part of the encounter was when Dominic won 6 consecutive games to reverse the scoreline from 2-4 to 6-4 2-0 in his favor. Then it was time for Sasha to have a great stint to win four straight games after he was 2-3 down in the second set and bring the final to the decider. In the 3rd set, there was no fuel in the tank anymore for Zverev and Thiem cruised to bagel his friend. The final score was 6-4 3-6 6-0.

Thiem. My arm is a bit tired

Dominic was extremely happy “It’s been an unbelievably great week. The first time I had to defend a title and I made it. Maybe I played better in the three matches before this, but a final is always special. You have so much to win and so much to lose. I played a solid third set, and I’m really happy. My arm is a little tired, but I will be ok for Roland Garros on Monday.”

This is Thiem’s 6th career title/

Zverev. I was too tired

Alexander stressed the significant effort he put this week “I spent about 12.5 hours on court this week, so I’m a bit tired. Against a player like Dominic, who is one of the best clay-court players right now, you have to be at your best to beat him. There’s not a lot of chances. It’s really tough to win when you’re not at 100 per cent.”

Probably this is the last time that Thiem and Zverev will play a tournament before the Roland Garros. That is too taxing for them. 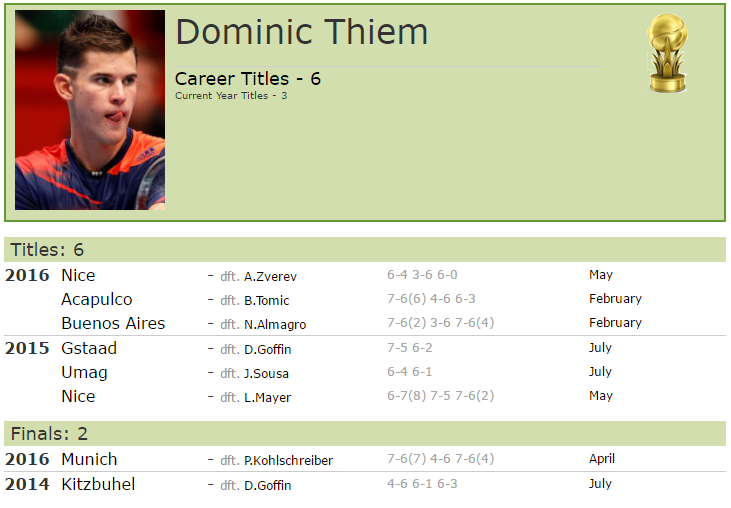