This is a truly amazing moment for Jack Sock!

The American won his first ATP1000 a couple of weeks ago in Paris, and now he reaches the semifinals at the ATP Finals in London after beating Cilic and Zverev.

The match against Zverev

Jack was the clear underdog against the German, but recently Zverev has been struggling a bit with his form after a long season while the American is playing the best tennis of his career. Therefore, the world no.9 felt he had a shot at this encounter.

After winning the first set 6-4, Sock lost the second set in no time (1-6), and he was also 1 break down in the decider (0-1). The crucial moment of the match was when Sock received a penalty point for throwing a ball in the crowd after he dropped his serve in the 3rd set. As a result, the following game started with Zverev leading already 15-0. At that point, it seemed that Sock was close to “game over”; instead it was Zverev to lose his concentration to give back the break after double-faulting twice and missing a simple forehand. The German looked completely annoyed with the situation and eventually Sock ended grabbing 4 consecutive games (from 0-1 to 4-1) before winning the match 6-4 1-6 6-4. 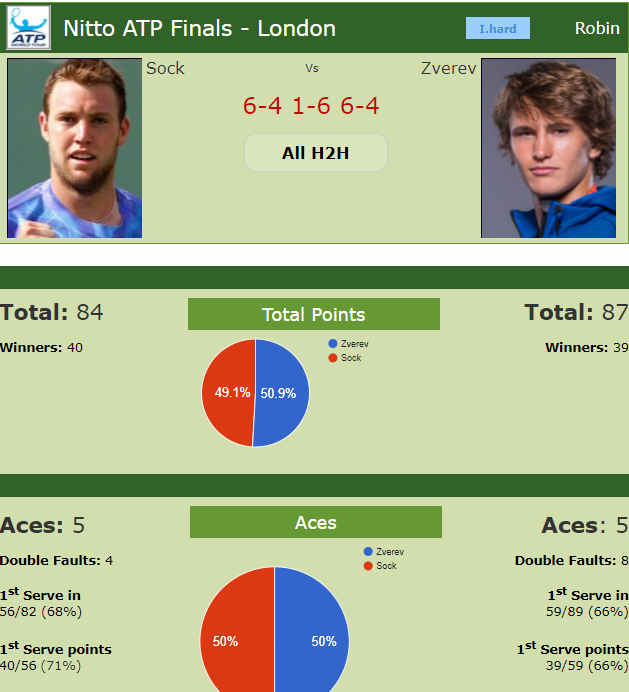 I kept on fighting. SOCK

After the match, Sock commented

“That was a rollercoaster match. He played well in the second, I didn’t have the hottest start in the third, but I kept in there and kept fighting.”

Reaching this semifinal is a great accomplishment for a guy that was considered having no chances to go deep at these Finals.