Roger Federer reaches the London semifinals in style without losing a single match in the round robin after defeating Marin Cilic.

Roger was somewhat nervous at the beginning of the match also because he was struggling a bit with his backhand. The Swiss wasn’t in a great position after he lost the opening set at the tiebreak after almost 1 hour. In fact, the rule of the game for Roger at each tournament is winning without spending too much energy and losing an opening set after 1 hour means that if you are very lucky, you win the match in 2 hours. Eventually, Roger was “very lucky” and he found his tennis in the 2nd second set playing a bit more conservatively. Roger broke Cilic in the 10th game to win the set 6-4. 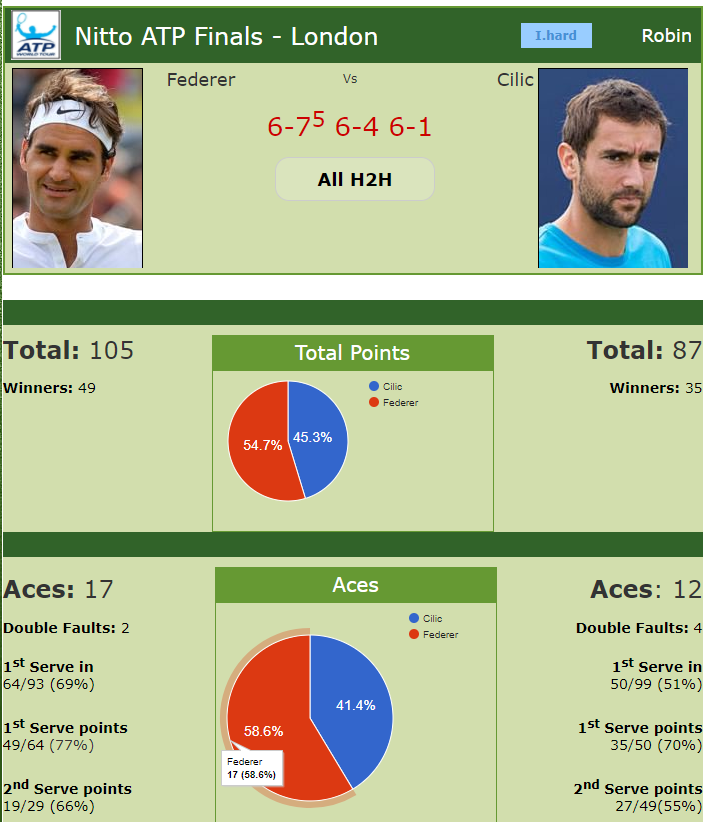 I was too aggressive. FEDERER

It was very interesting Federer’s analysis of the contest as according to the world no.2 he was too aggressive at the beginning. Roger commented

“I played very well so really happy to be playing at this level right now. It wasn’t easy. I mean, look, it’s a fast court. It’s indoors. We’ve seen it now: when you miss a few too many opportunities, you can really pay the price at this tournament. So we’ve seen some swings of momentum in a lot of the matches this week.

I think in the beginning I was slightly overaggressive in the first set on some crucial points rather than maybe being patient. I was able to turn that around late in the second set. Then just had a much better feeling in the third set.

Maybe also Marin’s level dropped, I’m not sure. But definitely was dangerous there for a while.”